The Berliner Turnerschaft proudly welcomes you to this years orienteering sprint championship of  Berlin and Brandenburg. The race takes place on the 18th of June 2017. The event takes place in the context of the Langer Tag der Stadtnatur event in the Hasenheide park and the Tempelhofer Feld park.

For beginners and novices, we offer courses short easy (DirKL), courses easy long (DirLL) and male/female under 10 accompanied, as well as a children’s orienteering course at the competition center (WKZ).

After our successful hosting premiere last year at the BT-City-OL 2016, we are looking forward to welcoming you back to Berlin. 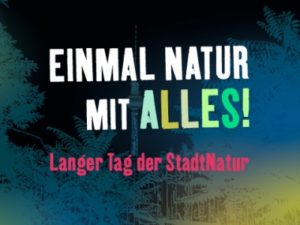 The sprint competition is part of the Langer Tag der Stadtnatur event series which takes place on the 17th and 18th of June on various locations in Berlin. The event series is organized by the Stiftung Naturschutz Berlin. Within this context about 400 events are hosted around the city – all in context of nature life in the city.

Therefore orienteering as a nature sport may not be missed and we welcome everyone to take part and try out this great sports activity.

How to get there

Since on the 18th of June in Berlin also the Velothon takes place, we strongly recommend to get to the competion area by the subway. The way from the underground station Hermannplatz U7 / U8 (exit Wissmannstraße, which you may reach from the lower platform) and the way from station Boddinstraße U8 is marked (construction site ribbon red / white).

For the participation in the Berlin Brandenburg championship, a membership of a sports club which is member of the Berliner Turn- und Freizeitsportbund or the Märkische Turnerbund Brandenburg is required. Please refer this club in your subscription to this event.

The rankings are automatically scored. A separate application is not required.

For beginners and newcomers we offer the following categories:

(D / H-10B): approx. 2km long, orientation-technically easy course, suitable for children up to 10 years, who can be accompanied by adults

The top three of the Berlin Brandenburg championship in each age group receive championship medals, certificates and own the title of “Berlin-Brandenburg-Meister”.

In the children’s categories all participants receive certificates.

International participants may register at OrienteeringOnline

Applications received after final registration date up to the closing date (13.06.2017) are subject to a surcharge of 2, – €. The start list is then created. Late post-registration (by email or on the day of the event up to 60 minutes before noon) is only possible within the scope of existing vacant places and costs twice the registration fee.

Please note that the registration and payment should be made jointly by club.

Registration fee 2, – € for all championship categories

Late registrations (after 13.06.2017 up to one hour before noon) only within the scope of available vacant places with a double entry fee.

The side categories do not pay any additional fees.

The registration fee is to be transferred to the following account:

Cash payments in the competition office on the day of the event are as well possible by prior arrangement by email.

There is no refund given in case of non-entry.

SportIdent Chip generationen 5-11 are possible, Air + is activated (= mixed operation), SIAC can be borrowed to a limited extent against rental charges at the competition center. The items are also provided with punching pliers, which must be used when the control check stations fail.

13:45 Competion start time of the 2nd run in the Hasenheide

The competition takes place in two separate races in the Hasenheide park and on the Tempelhofer Feld park. In the final ranking the times of both runs are added.

The Hasenheide is a park in the district of Berlin-Neukölln. In addition to playgrounds, animal park, cinema and rabbit, the park also features a parked parkland. The highest elevation in the Hasenheide is the Rixdorfer Höhe – a 67.9-meter-high Trümmerberg, on the slopes of which is located in the form of a pakrlike forest vegetation. On weekends is to be expected with partly high visitor traffic in the park!

The Tempelhofer field is a 300-hectare big park, which is used in a variety of forms by the Berliners: running, skating, cycling, baseball, BBQ and the city garden. In a national decision in 2014 the building of houses on the outer shores of the park was prevented. Because of the Velothon taking place on the same day, large areas of the park are blocked and a particularly high volume of visitors has to be expected. A factor that should not be underestimated is the usually steady wind across the extensive parking areas.

For the entire Hasenheide and the part of the Tempelhofer field to the north of the northern runway from 18.06.2017 until the end of the tournament, a ground barrier (see marked competition areas in the above card) is valid.

The competition center is located in the

You can access the competition center via the passage of the Volkshochschule Neukölln. The schoolyard is closed as part of the competition area until after the first round!

There are changing rooms, sanitary facilities and showers.

OL-Shop Conrad will come to Berlin and cover your needs of orienteering equipment.

The athletics department of the host club will serve coffee, cake and bratwurst and looks forward to donations for our work with young talents.

With the application you accept the participation conditions.

We look forward to seeing you!

Questions can be directed directly to us here:

This website uses cookies to improve your experience while you navigate through the website. Out of these, the cookies that are categorized as necessary are stored on your browser as they are essential for the working of basic functionalities of the website. We also use third-party cookies that help us analyze and understand how you use this website. These cookies will be stored in your browser only with your consent. You also have the option to opt-out of these cookies. But opting out of some of these cookies may affect your browsing experience.
Necessary Always Enabled
Necessary cookies are absolutely essential for the website to function properly. This category only includes cookies that ensures basic functionalities and security features of the website. These cookies do not store any personal information.
Non-necessary
Any cookies that may not be particularly necessary for the website to function and is used specifically to collect user personal data via analytics, ads, other embedded contents are termed as non-necessary cookies. It is mandatory to procure user consent prior to running these cookies on your website.
SAVE & ACCEPT
Skip to toolbar